The center  considered  as a national resource for science and human knowledge and specialist in the affairs of social and economic, historical and geographical, political and cultural strategy with focusing on national frame, The center established for national objectives in accordance with the vision and mission of the uod, The center was opened on 22 April 2006 under the name " the Center of Kurdish Studies and save documentations" then renamed " Beşikҫi Center for Humanity Studies (BCHS)" As a response of  necessities  that  imposed by the developments of the recent period.

The interest areas  of Center :

The importance of the Center:

The importance of center can be determined as the following:

-      The importance of scientific research in achieving of national development objectives and save the historical documentation, particularly in the social, economic, geographical and historical heritage and antiquities areas.

-      Due to the recent political,social,economic, international geopolitical, regional and local situations, Revival many historical, geographical, social and economic facts and even security and geopolitical and cultural heritage about Kurds and Kurdistan has become a necessity.

-      Correcting many erroneous impressions that haven been adopted by authorities and international institutions mistakenly or through suspicious media channels about Kurdish Issue.

Increasing the activities of the University of Duhok institutions and it's scientific cadres in scientific research achievements at the level of the Kurdistan Region in the areas of historical, social, economic, geographic and save national documentation, for the purpose of increasing the contribution of university staff in the achievement national development in the above areas.

Supporting scientific research and documentation in social and human sciences sector with a focus on national priorities through supporting and funding research projects and translation and printing books that dealt with our national heritage in the literature of neighboring countries and other countries.

The center seeks to achieve the following objectives:-

1.        Raise the level of humanities scientific research in the University of Dohuk :

-      Increase humanities and social scientific research and placed the global standards in the quality of research outputs.

-      Make a long agreement and partnership with institutions research centers locally, regionally and internationally to Share experiences in common areas.

-      Organize conferences, seminars and scientific meetings in several of the Humanities specialization with a focus on: national contents, regionally and internationally.

-         Stimulate researchers in the fields of humanities to take apart into development of scientific research sector, especially in the fields of history, geography, sociology, economics, politics, and with nationalism and national capacity.

-         Adopt and support of the highest and valued researches projects in the field of political, historical and geographical sciences.

-         Conducting workshops in social, economic and political issues and recent problems within the Kurdish community.

3- Employing the outputs of scientific research in particle areas:

-         Serious work on scientific research output transfer towards humanitarian field applied in the social, economic, political, and development within State institutions and halls of decision making.

-         Work to transfer the output of scientific research in the humanitarian field into applied area of the social, economic, political and development within state institutions and decision-making authority.

4- Supporting the process of publishing, translation and documentation, especially at the national level:

-          Interest in oral history, by conducting lengthy illustrated interviews with centenarians, witnesses and makers historical and political events, and saved in files.

-         Printing and translating what has been written about economic, political and social history of Kurdistan in other languages into Kurdish language.

-         Transfer and translation the archived studies of global and newspapers and libraries on Kurdish issues.

-         Following up and retrieve the historical manuscripts about Kurdish history in global libraries.

Administrative Structure of the Center:

To facilitate the work of the Center and the administrative and scientific tasks, organizational and management structure has been placed as below: 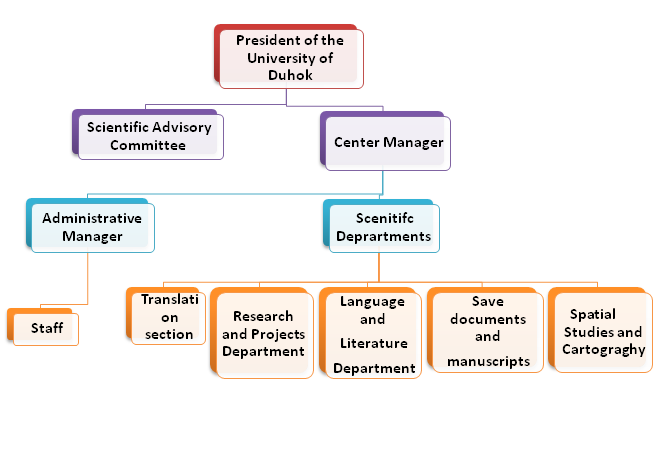