The Dutch Embassy Delegation at UOD 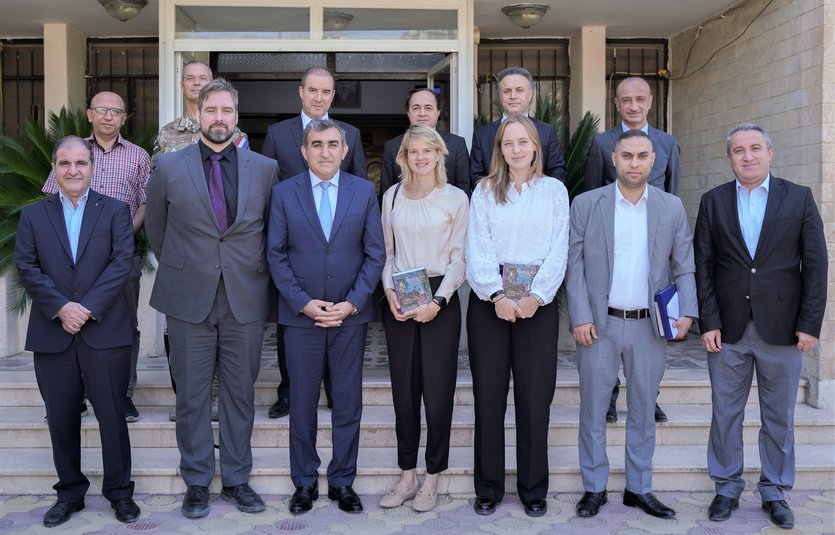 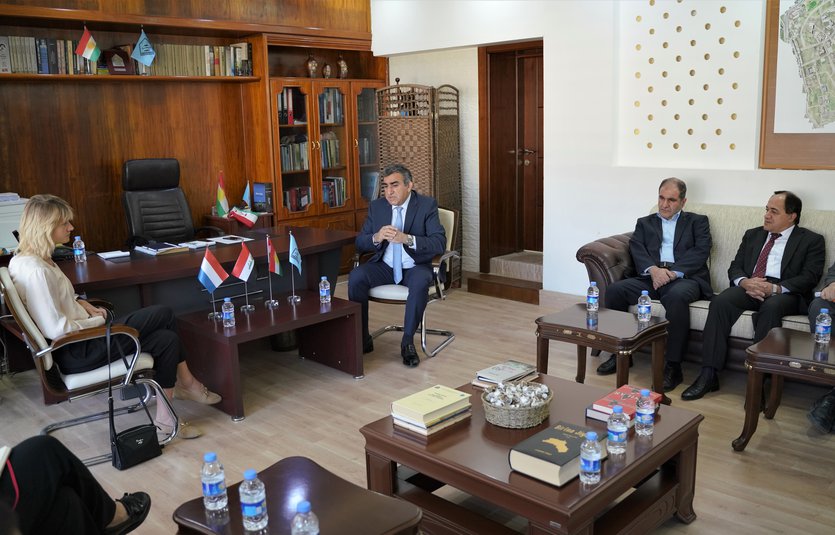 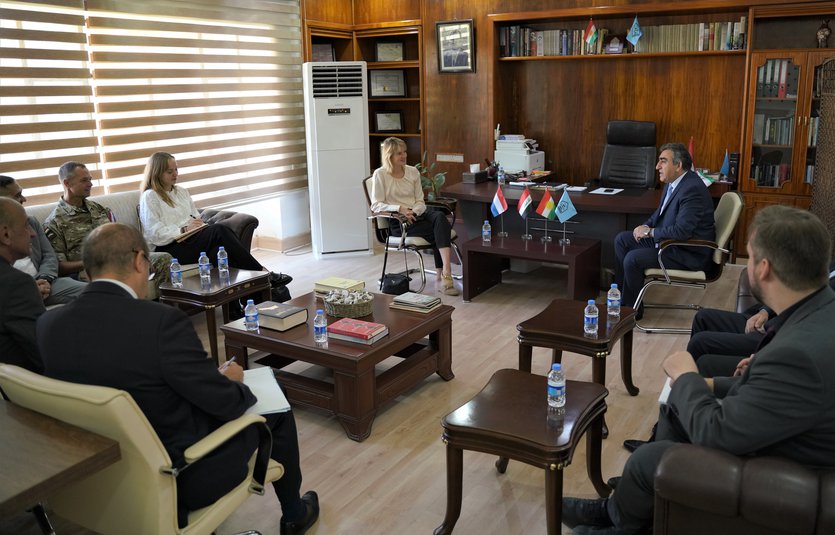 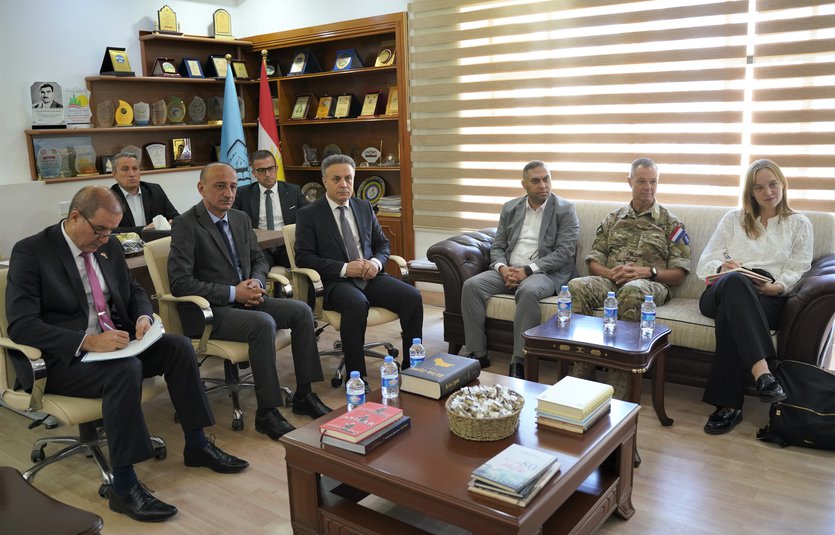 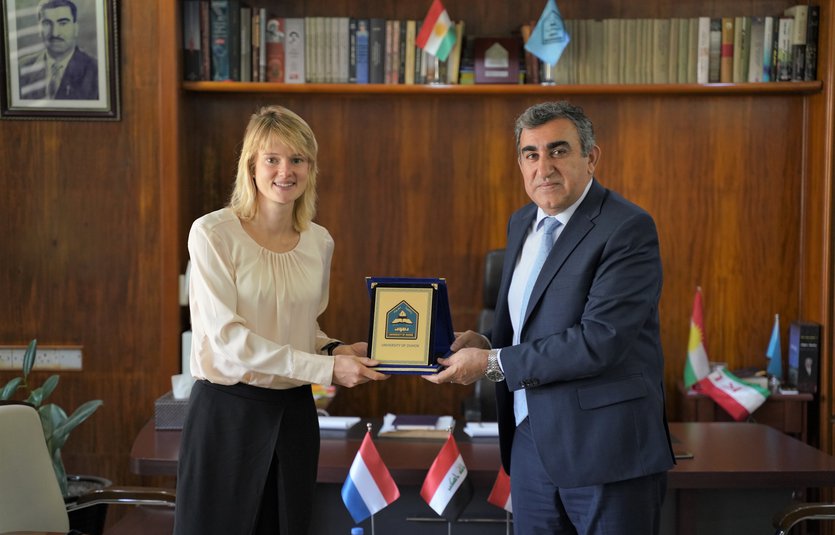 A delegation from the Dutch Embassy in Baghdad/Iraq, paid a visit to the University of Duhok (UOD) in the early hours of September 26, 2022. The mission, which included Miss Sylvia Hazenbroek, Mr. Jedi Bochum Bodies, Yaser Kuti, and Mr. Hans Froch, the military advisor to The Ministry of Peshmerga Affairs, was led by Miss Myriam van Roeden. She provided a brief introduction about their mission to visit UOD and hoped for close academic relations between the Netherlands and the Kurdistan Region. The meeting with the Department of Peace and Humanrights Studies at College of Humanities and starting a conversation on academic involvement in the Kurdistan area were the focus of their visit. Dr. Dawood S. Atrushi, president of UOD, and Drs. Lokman Hadi and Ahmad Mohammad, vice presidents for scientific affairs and administrative affairs, graciously welcomed the delegation.

Dr. Atrushi began the meeting by introducing the UOD delegation present in the meeting , and then went on to discuss the university's organisation, viewpoints, and activities. He praised UOD's turbulent history, as well as its pioneering participation in the Erasmus Plus program of the European Union and well-established academic network with European universities, particularly Germany where 21 undergraduate students from the Biomedical Engineering Program are currently completing a 6-months exchange program at Technische Hochschule Mittelhessen University of Applied Sciences - THM supported by DAAD: German Academic Exchange Service. The program is a dual degree undergraduate program in Biomedical Engineering between UOD and THM Giessen, which allows students to study for 3.5 years at UOD and 6 months placement and internship in Germany through THM Giessen.

Academic links with the Netherlands represent an important chapter in UOD's international engagements, particularly in agricultural disciplines. Dr. Atrushi introduced Prof. Rafael Shlemon Toma, the project manager for Internationalisation of Agriculture Education at UOD, who explained that the first project, called "Make Horticultural Knowledge Work", was sponsored by the Nuffic - The Dutch organisation for internationalisation in education. It was a one-year project involving various partners, including the University of Basrah, The Jordan University of Science and Technology (JUST), The Dutch Organisation Delphy for Worldwide Expertise in Food & Flower, iCRA which is dedicated to improving the livelihoods of farmers and their communities, another Dutch Organisation called Lentiz which is the linchpin between education, governments, organisations, and companies in our region, The Jordanian Consultancy “ECO Consult” which is a leading consulting and development group tackling fundamental development and sustainability challenges in Jordan, the Middle East, Asia, and North Africa Eco-consult, and The University of Duhok (UOD), which was represented by the UOD's College of Agricultural Engineering Sciences. It concentrated on Training of Trainers (TOT), Extension Service Training, Technical and Vocational Education and Trainings (TVET), organisational strengthening, and the introduction of new agricultural technology.

"Potato Value Chain Development in Kurdistan Region-Iraq" is our 2nd project. It is a five-year initiative sponsored by The Netherlands Enterprise Agency (RVO) which focuses on expanding potato production and processing with five partners: CABI which creates and applies knowledge that addresses challenges faced by people around the world, Kurdistan-Holland Company (KH), HZPC working with potato innovations since 1898, the Ministry of Agriculture and Water Resources of the Kurdistan Regional Government (KRG), and The University of Duhok (UOD). The five-year project, funded by RVO on behalf of The Dutch Ministry of Foreign Affairs, will establish a potato cold storage and processing factory in Duhok province – which will employ 160 workers and be capable of producing 6,000 tons of French fries each year. This will teach approximately, 8000 farmers on new potato growing technology as part of this initiative, in addition to contracting 800 farmers to buy their potato crop for the French fries firm each year. Prof Toma proudly mentions the identification of two new varieties of potatoes for the first time by the program. The collaboration in one of the widest academic programs in the Middle East.

Dr Atrushi talked about the two main priorities at UOD for sustainable development and engagement through meaningful international relations, the first is the UOD’s College of Agricultural program which is under review for reform and updating curriculum. The UOD hopes to expand the college through international collaboration, and for that the UOD is also preparing to have its 1st Agriculture Summit in the coming Nov 2022. These investments are in line with the mainstream policy of Kurdistan Regional Government (KRG) in priorities expansion and modernisation of agriculture in the region. Dr Atrushi told Miss Myriam van Roeden, She welcomed the initiative and showed interest for an official involvement from the Dutch embassy in Iraq. She also stated that the Netherlands would like to promote climate change efforts and Iraq's role in responding to climate challenges. In response to climate change solutions, the Netherlands would like to implement policies that would produce jobs in Iraq.

Dr. Atrushi continued with UOD's second priority, which concerns the teacher education programs, in order to provide a better basis for future social changes in the region. The UOD aspires to see more academic institutions from the Netherlands to be involved in preparing the future leading figures in the Kurdistan Region.

Miss Myriam van Roeden commented on the Netherlands' perspective on potentials in Iraq, where 75% of the population is under the age of 35, making the nation eligible for investment in order to transform and improve the country's existence. It is critical to have colleges like UOD working hard to discover solutions to the country's present critical concerns.